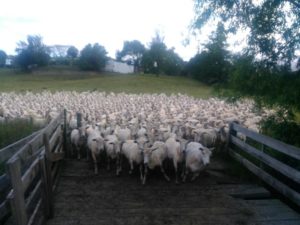 Welcome to news about Marlow Coopworths and what has been happening over the last few months.
It has to have been one of the best run of seasons I can recall. I’m reluctant to say this in case I jinx it but long may it continue.
It was getting dry before last years ram selling but I traditional sell a lot of stock for this eventuality.
But then as you know, we had an extraordinary amount of rain from the 25th of November until Christmas Day, some 250mm, which set us up right through until the autumn rains came.
The challenge became maintaining control of the huge amount of feed grown and then regaining quality throughout the winter.

The extra feed resulted in great tupping weights and condition scores and the best ewe hoggets I’ve ever had so they tupped well.
The winter remained dry which on my heavy soils is a good thing and continued with excellent weather through lambing of both the ewes and hoggets.
I tagged 895 lambs over several weeks and my ageing legs were fairly tired by the end of it.
A feature were the very good birth weights of both ewe and hogget lambs but with very few lambing difficulties. A lot of hogget twin lambs were around 5kg out of their very well grown mothers. One single came out all by himself at 6.8kg but his dam’s eyes must have been watering after that effort.
Several clients have reported record lambing %’s in the high 160’s ewes to the ram.

The spring has also been great and having drenched all the lambs last week, I’m very pleased with them and look forward to a great crop in a few weeks when I wean.
Above is a photo from last year’s weaning muster at dawn with my commercial MA ewes down at the Woburn Road property. 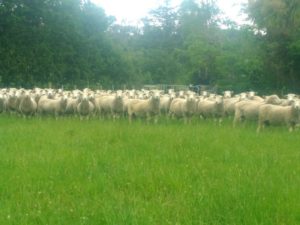 The reproduction index (DPCR) is now capped to reduce R’s influence on the index and lessen continued selection for triplets while increasing influence from the other sub traits like survival, growth and meat.
This shows up in the selection sheets with top rams being high in traits like survival and growth and not dominated by reproduction.
The ‘Single Step Genetic Evaluation’ is up and running and processes all the pedigree (performance), phenotype and genotype data simultaneously. For studs like Marlow that has genotype data from DNA, this will enhance the animal’s breeding values and increase breeding value accuracy, especially when the animal is young.
You won’t see any differences in the selection lists from this change but it does mean that genetic information from the DNA sampling I’ve undertaken over the years will now be incorporated in the numbers you use for selection.
The latest (October) runs on the SILACE site show Marlow continuing to benchmark very well.
This is a run of 2500 stud sires of all maternal breeds from around the country. A Marlow sire bred the top two rams on the list and there are 3 sires on the first page in the top 35. Many of you bought progeny from these three rams last year.
Marlow also features well on the MW (Maternal Worth) + FE with three rams in the top 12. 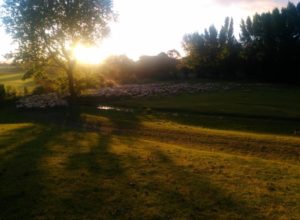 A combination of lowered exchange rates, strong consumer demand and African Swine Flu’s devastating impact on China’s pork pro-dduction indicates continuing excellent prices for our sheepmeats and beef for quite some time ahead.
This last few years has been the best run of prices in my nearly 40 year farming career.
Keep making hay while the sun shines!

The great run of seasons mentioned earlier has assisted in growing out the best crop
of ram hoggets I’ve had.
When I sorted them out a few days ago to select the top ones for the FE Ramguard test, they already averaged 75kgs and will be a bit bigger when you see them.
There are 10 undergoing the Ramguard test and the scientist in charge of the
programme offered the opportunity to challenge them at .62 given the last two years of good results. But I declined as I believe the .6 level is a decent enough challenge. 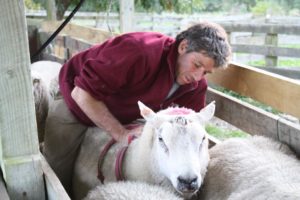 Its equivalent to a very large ingestion of spores full of their sporodesmin toxin.
I see there are now a lot of studs on the East Coast advertising they are selling FE tolerant rams but few of them are actually doing Ramguard testing and Marlow is the only FE Gold stud in Hawkes Bay.
The vet came out last week and palpated all the 2th rams and blooded the MA rams and Marlow’s Brucella Ovis free certificate will be in the yards for you to peruse.
Not one of my Coopworth rams but a terminal. Keep those straps from twisting and putting on a harness is a piece of cake.
Remember, if you introduce a new client, you get 25% of their first year’s purchase deducted from your account.
I’ll be busy over the next few weeks weaning, sending lambs to the works, shearing, mouthing, killing bulls and all the other stuff that you will also be doing.
I’ll be in touch early December to arrange a visit from you to come and select your rams.
Once again, thank you very much for your ongoing patronage and I’ll see you in a few weeks.